To share your memory on the wall of Terry Baker, sign in using one of the following options:

Terry loved life in general, but especially his family and friends, his hometown, baseball, hockey and golf, art, poetry and music. He was a rink rat at the Bowmanville arena in his early years, and enjoyed driving the zamboni. His early career years were spent patrolling Oshawa as a Durham Regional Police Officer and he received multiple commendations for outstanding service. He went on to finish his working life at Pickering Nuclear Plant, retiring in 2002.

It was his life outside of work that he truly enjoyed, immersing himself in his many hobbies whenever he could. He was a talented handyman/carpenter who spent many hours building decks and finishing basements, and spent hours tinkering on projects in the garage. He pitched and caught on local softball teams wherever he lived, was a hockey referee and softball umpire most of his life, co-coached the Canadian Men's B'Nai Brith Softball Team to a gold medal at the 14th annual Maccabiah Games in Israel (1993) and kept complete statistics for every softball game he ever played - no joke.

Terry was someone who paid attention to the details, in words, nature, his work and in his hobbies. He penned a library of 147 poems in recent years covering many topics of interest to him. He enjoyed chasing knowledge in the areas of world history and geography, and was a great one to tell stories about the local history and geography of his beloved Bowmanville area.

As per Terry's wishes, a formal service will not be held. However, once COVID-19 restrictions have lifted, an informal service will be held at Mount Vernon Cemetery in Solina, where a portion of Terry's hydrolyzed remains will be returned to the earth near the old Baker Farm, his childhood home. In lieu of flowers, please donate to a cause that is important to you or simply spend some time with your loved ones, reflecting on the important things in life:

"Breathe, breathe in the air. Don't be afraid to care. Leave but don't leave me.
Look around, choose your own ground. For long you live and high you fly.
And smiles you'll give and tears you'll cry. And all you touch and all you see
is all your life will ever be." Pink Floyd (One of dad;s favorites).
Read Less

To send flowers to the family or plant a tree in memory of Terry William Charles Baker, please visit our Heartfelt Sympathies Store.

There are no events scheduled. You can still show your support by sending flowers directly to the family, or planting a memorial tree in memory of Terry William Charles Baker.
Visit the Heartfelt Sympathies Store

We encourage you to share your most beloved memories of Terry here, so that the family and other loved ones can always see it. You can upload cherished photographs, or share your favorite stories, and can even comment on those shared by others.

Posted May 16, 2021 at 07:36pm
My condolences to Terry's family. Terry and I worked together years ago. Spending 12hr shifts together a lot I got to hear about his family. My gosh he was so proud of all of you. His face lit up. And funny? Holy cow he would tell me these jokes and i would have tears running down my cheeks from laughing. Honestly, some of them i didn't get but i never told him. He was just a genuine person. What you saw is what you got. He will be missed. Again, i am so sorry for your loss.
Comment Share
Share via:
DS

Posted Apr 20, 2021 at 08:21pm
We were so sorry to hear of Terry’s passing. He really loved his sports. We spent many hours at the ballparks, practicing or playing games. He was always friendly to everyone and will be missed. Dennis and Emily Sullivan
Comment Share
Share via: 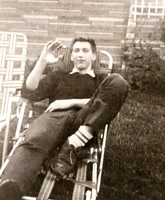