To share your memory on the wall of Garfield Lue-Shing, sign in using one of the following options:

To send flowers to the family or plant a tree in memory of Garfield Joseph Lue-Shing, please visit our Heartfelt Sympathies Store.

There are no events scheduled. You can still show your support by sending flowers directly to the family, or planting a memorial tree in memory of Garfield Joseph Lue-Shing.
Visit the Heartfelt Sympathies Store

We encourage you to share your most beloved memories of Garfield here, so that the family and other loved ones can always see it. You can upload cherished photographs, or share your favorite stories, and can even comment on those shared by others.

Posted Dec 15, 2020 at 08:55pm
Dolores, our hearts go out to you and the family on the lost of your beloved. May the memories always give you comfort and some big "belly" laughs **

3 trees were planted in the memory of Garfield Lue-Shing

Posted Dec 22, 2020 at 07:36pm
I'm so sorry for your loss I will always cherish the beautiful and funny memories I myself and all of you have had over the years with Garfield xo

Posted Dec 16, 2020 at 03:57pm
My dearest Uncle. You will be greatly missed. I appreciate and cherish everything you have taught me and all the good times we had. I love you and miss you.
Comment Share
Share via:
RO

Posted Dec 15, 2020 at 07:47pm
We shared a lot of laughs with Garfield working with him at Sun Life over many years. He will be missed. Our condolences to Delores and family.
Comment Share
Share via:
GK

Posted Dec 15, 2020 at 09:52am
My sincere condolences to Garfield's family. Over the years of working with Garfield his animated personality, laugh and good nature leave me with many good memories of him.
Comment Share
Share via: 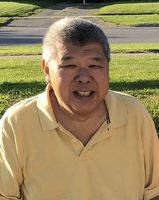