Memorial Candle Tribute From
Morris Funeral Chapel Ltd.
"We are honored to provide this Book of Memories to the family."
View full message >>>
In Memory of
Charles
"Charlie"
Nicholson
1934 - 2015
Menu
Send Flowers 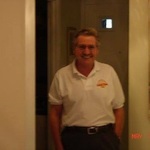 Nicholson, Charles
Peacefully at Orillia Soldier Memorial Hospital on Friday, November 20th, 2015 in his 81st year after a courageous battle with cancer. Predeceased by his loving wife June (2001) and his grandson, Andrew. Loving father of Brian (Kyle), Derek (Susan), Michael (Leslie) and Kevin (Beverly). He will be sadly missed by his grandchildren Anthony, Lindsey, Connor, Amber, Amanda, Angelic, Robert, Sarah, Emily, Grace, John and Darby, his great grandchildren Ryland, Shawn, Emma and Jackson, his brothers of William (England) and Robert (Australia) and by his extended family across Canada. He will also be missed by his long-time companion, Christine, her daughter Maryanne, sons Stanley (Melissa) and Jose, and grandson, Sean, and their extended family and friends.
Charles was a proud veteran of the British Seventh Army serving in Germany, and a member of Canadian Legion Br. 43. He and June with 3 sons immigrated to Canada in 1965 and added a fourth son in 1969. He was proud of his extended family who all moved together to Canada. An electrician, he worked on the initial Toronto-Dominion Centre, the Pickering Nuclear Generating Station and was one of the initial employees of the Toronto Sun newspaper. A long-time member of the International Brotherhood of Electrical Workers, Local 353 and a proud member of Moose Lodge 1600. He was both fiercely Scottish and proudly Canadian and was an ardent fan of the Toronto Maple Leafs, Toronto Blue Jays and Oshawa Generals.
Visitation will be held at Morris Funeral Home, 4 Division Street, Bowmanville, ON, (905-623-5480) on Thursday, November 26th from 7 – 9 p.m. Interment will occur at Thornton Cemetery, Thornton Rd N, Oshawa, ON L1H 7K4 on Saturday, November 28th at 2.00 pm followed by a Celebration of Life Event at the Bobby Orr Room, Civic Recreation Complex, 99 Thornton Road South, Oshawa at 3:00 p.m. Memorial donations to the Canadian Cancer Society or a charity of your choice would be appreciated.

To send flowers to the family or plant a tree in memory of Charles "Charlie" Nicholson, please visit our Heartfelt Sympathies Store.